Ensuring browser compatibility of apps is an ongoing concern among browser developers. It is common for web apps to be required to run on multiple browsers.

It is very common for businesses to require that their app works on certain browsers. Facebook, for example, requires that a version of their web app should still work on Internet Explorer, a browser known for its gaping holes in browser API support. Enforcing this requirement is met by testing the app on different browsers but doing so usually introduces development overhead because it requires tests to be written and time for the tests to be run.

In place of tests, it is common for developers to reference compatibility tables, which are tables which list all the browsers a given API is supported in. However many of these tables are either incomplete or non-existent for certain APIs because they are manually filled in by developers, which is not easy. There are roughly 10K APIs and 131 variants of browsers, which amounts to 1,310,000 API compatibility entries that must be filled in. Compatibility records are maintained by two projects: Mozilla Developer Network (MDN) and caniuse. 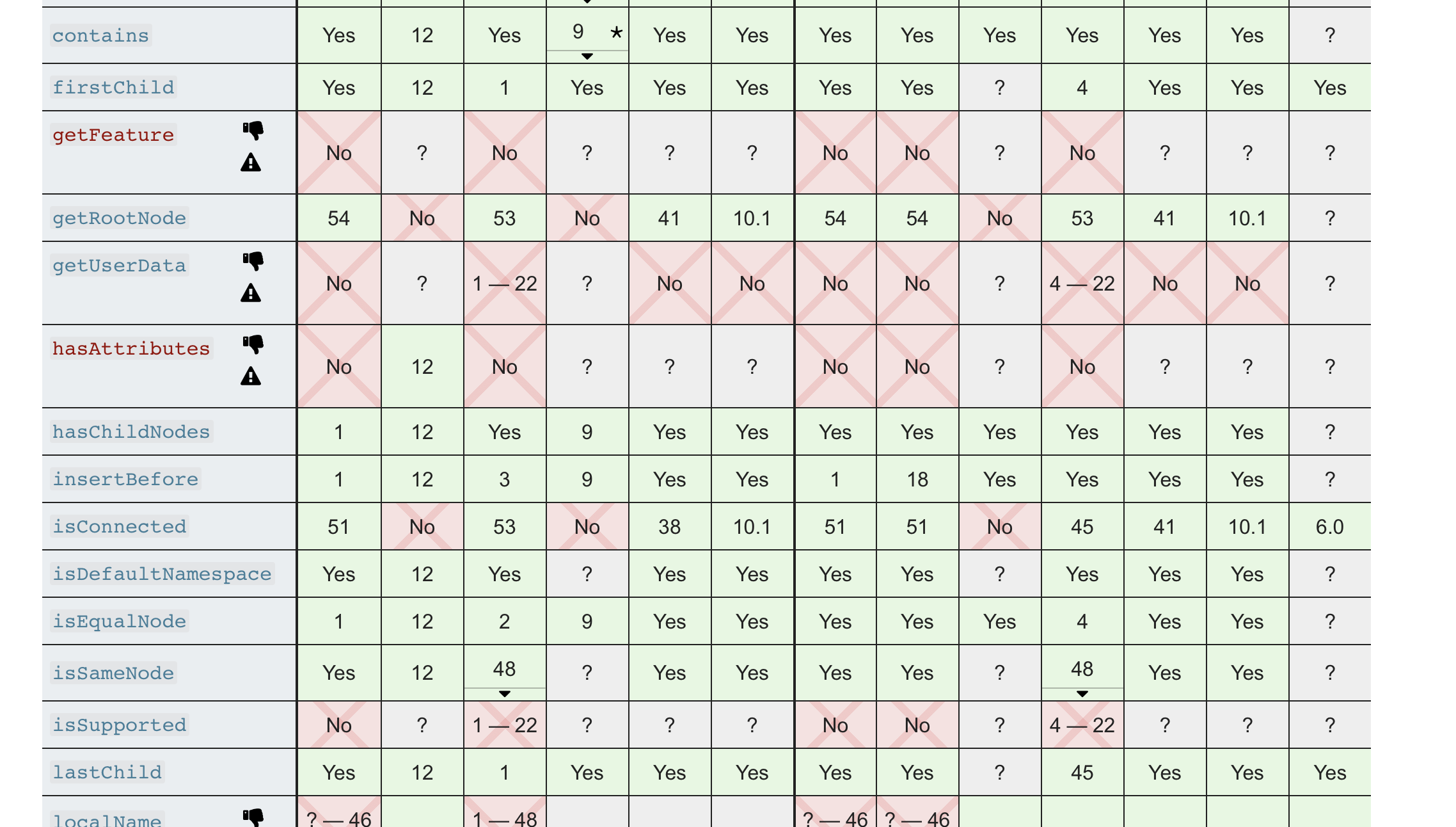 caniuse is the most complete collection of these API compatibility records. But this solution is difficult to scale. With a limited amount of developers with limited time and resources, it is difficult to maintain a table with thousands of records.

As you can see, caniuse has over 1K issues and only one active maintainer to address them. 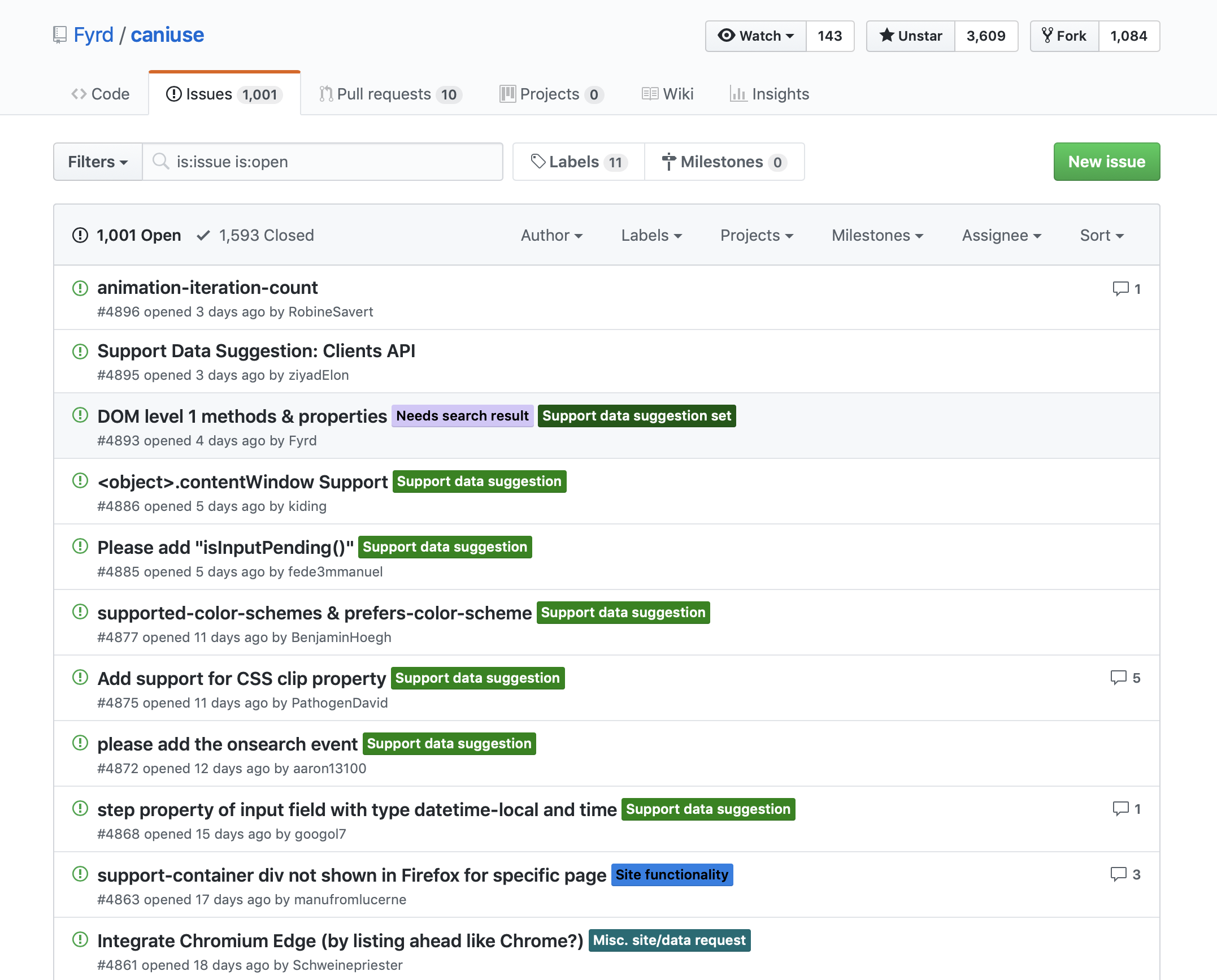 APIs are defined with a special language called WebIDL. API authors write the specification for APIs in the form of WebIDL, a language which specifies the interface of the API. Here's an example of WebIDL corresponding to the TextEncoder.encodeInto API:

JavaScript tests are generated from the WebIDL.

Here is a simplified version of the corresponding compatibility tests that are generated from the TextEncoder.encodeInto API WebIDL example above:

The next step is to run these generated compatibility tests in each browser. This is done by dispatching the tests to run in remote browsers where it is then evaluated. These browsers are hosted by a number of services, including browserstack and saucelabs. The results of the evaluated tests are then returned as responses to compat-db.

The naive implementation would need to run tests for every version of every browser for every API in order to build a complete compatibility table.

Summing the total number of browser versions, we get 131 total versions.

We can observe some certain browser heuristics to reduce the number of tests required to build a complete compatibility table. Once a browser implements an API, it cannot be taken out. This is a general principle web browsers follow because they can't "break the web". If a browser yanks a previously supported API then it will break pages that depended on that API existing in that browser. APIs are deprecated but never removed (only in some extremely rare scenarios i.e. SharedArrayBuffer).

Using this heuristic, we run a modification that finds the first version of a browser that supports a given API. The algorithm almost identical to binary search: look at the sorted versions of any given browser.

Consider the example sorted versions of a browser:

When determining the runtime for all the browers we need to make some changes. First we'll create a list of all the browser versions and then sum over it:

The future of compat-db includes integration with static analysis tools, like the following projects.

eslint-plugin-compat, an ESLint plugin which lints the compatibility of JavaScript code. Here's an example of it in use:

compat-db will serve as the source which contains the compatibility records which eslint-plugin-compat refers to for API compatibility lookups.

Automatically Including Polyfills and Shims

Polyfills and shims are pieces of code which implement an API if it is not supported by the runtime. For example, if chrome does not support the fetch API then a polyfill for it would implement that function using native JavaScript.

At the time of writing, there is no way of automatically including the necessary polyfills or shims for a codebase given a list of target browsers. Library authors include polyfills for their libraries with the intention of simplifying the process of using libraries. This way, library consumers do not have to worry about including polyfills themselves. However, this comes at the cost of bloating sizes of apps and libraries which consume these libraries.

An ideal solution, now made possible with compat-db, is iterating through every API used, check compat-db to see if it is supported by the browsers the user is targeting, and then append the polyfills to the user's build. This solution, which should be used only in the context of apps as opposed to libraries, ensures that only the necessary polyfills and shims are included in the compiled output of apps.

compat-db is hosted on GitHub. I'm actively looking for contributors so let me know if you're interested in contributing! There's some work that needs to be done to make compat-db production ready.

Mathematics is a language through which we express our understanding of the world. With this in mind, I have created an ongoing list of the ideas captured by fields of mathematics. * Calculus and Differential Equations: Language of change * Graph Theory: Language of relationships * Linear